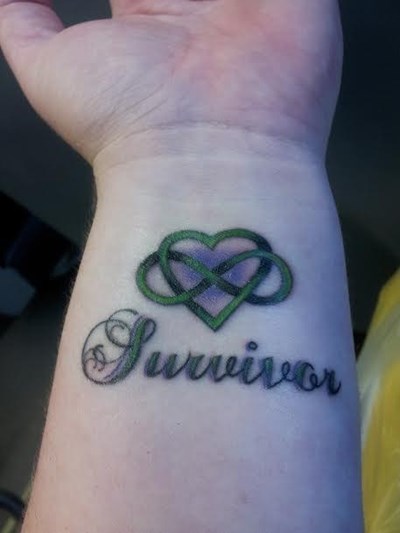 One might look at the title of the post and immediately question, why now? The answer is complicated. The short answer is: last night I spoke to someone with whom I went to high school. They were thanking me for my work on trauma and abuse and disclosed that they also had been raped. I thanked them for disclosing and for some reason, for the first time in a long time, decided to share my rapist’s name: Ben Ketchum. Their reply came like a gut punch:

At that moment I felt so many emotions all at once. Anger. Sadness. Numbness. But one rose above all the others--clarity. I don't want to stay silent any longer. I am not doing this out of malice. I am not doing this anonymously. I am attaching my full name and reputation to this post. I am speaking my truth and the truth of someone who told me their story firsthand. He had raped me and this incredibly brave person I screencapped above, which means it is entirely possible that he raped others. The person above has asked to remain anonymous and I fully respect their wishes. They have, however, given me permission to share parts of their story. I am honored that they disclosed to me. They will henceforth be known as Really Brave Person.

Let’s start with some history.

I've written and spoken pretty extensively about being a survivor of sexual assault. I wove it into a broader narrative about being bullied in school here. I was interviewed by Devi Ward on her radio show about healing after sexual assault. In 2009 I wrote about how powerful it was to reclaim my voice by sharing my story at Take Back the Night at St. Joe's and how that led me to start researching trauma and speaking out against sexual violence publicly, becoming a rape crisis counselor, and working with organizations to do sexual assault prevention work. I dedicated much of my energy to understanding trauma, specifically acquaintance rape. My rationale was that if I could understand how trauma affects the brain and the body, I could understand my reactions and choices after the rape (not reporting, becoming hyper sexual, becoming depressed, feeling worthless, and, most importantly, the choice to continue having sex with my rapist - we'll come back to that). I wrote academic papers on acquaintance rape and presented them at conferences around the country. My graduate school, "The Traumatic Aftermath of Acquaintance Rape" was accepted to multiple conferences. You can read a version of it here. I actually inserted my own survivor story into the anecdotal portion of the paper, albeit under a pseudonym (Nicole). It was taken directly from a blog I wrote in my LiveJournal in 2007 after taking a self-defense class. During the class I had a powerfully vivid flashback of the rape.

That was the moment I realized that I had PTSD (I was later diagnosed by a psychiatrist). I still struggle with PTSD to this day. I have flashbacks. I (sometimes) get triggered when I hear people's stories--especially when they're similar to mine. Getting triggered, for me, looks like anxiety, numbness, and dissociation. That tendency toward dissociation as a primary response to traumatic events led to being raped two more times, once in grad school and and once while working at the Philadelphia District Attorney's Office. Researchers have found that it is common for survivors of sexual violence to be victimized multiple times.

So when Really Brave Person shared their story with me last night, something clicked inside me. I don't know if it was the similarity of our stories (we both had childhood trauma, we were both self-identified virgins, he matter-of-factly told us that our virginities were gone). 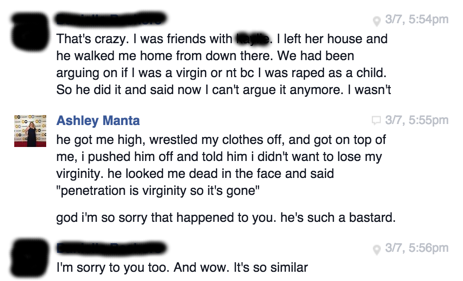 After the incident when I was 13, I didn't know what to do. I didn't identify it as rape until several years later because rape as it was taught in middle and high school was always couched in terms of stranger rape. I couldn't tell my parents because they didn't approve of Ben (edited to add: he was 16 at the time) and I had lied about where I was that afternoon. I continued to spend time with Ben because I was a social outcast and I had few friends and, more importantly, continuing to have sex with him helped normalize what had happened to me. At least this time I was having sex on my terms, I told myself. I also, in my infinite 13-year-old wisdom, decided that if I couldn't be a virgin any longer then I was going to become REALLY GOOD at sex since I believed that my only value came from my ability to sexually please my partner.

If I'm really honest with myself (and everyone reading this), Ben actually raped me more than once, but the second time wasn't with a body part--it was with an object. This memory is a little fuzzier, but I remember being in his bedroom some time after the initial rape. His best friend [redacted] was there hanging out with us. I think one of them was playing guitar. I don't remember what I was wearing, but Ben decided he wanted to start fingering me even though [redacted] was sitting right there. I remember resisting, embarrassed. He somehow got into my panties and I shut my eyes for a second. Suddenly I felt something cold inside me. I asked what it was. He said it was a glass test tube and that if I kept struggling, it would break inside me. I went limp and let him do what he wanted. I remember thinking that it was really fucked up that he did all of that with [redacted] sitting right there watching. I remember wondering why [redacted] didn't try to stop him.

About 6 years ago he added me as a friend on Facebook. I was surprised but declined the friend request. Later I changed my mind--maybe he wanted to apologize. He messaged me (I wish I still had the message, but I don't) and asked how I was doing. I was in grad school and had just finished writing my first paper on acquaintance rape. I told him that. He said something to the effect of "wow, and here I only thought it was statutory rape." I unfriended him that second. About three years ago I ran into him in the supermarket near my house. He approached me and made small talk. I dissociated through it and went home and cried in my boyfriend's arms. To this day, he still follows me on Facebook. Seriously. This screencap is from this morning:

I honor every person (of any gender) who has ever survived sexual violence. Every survivor is entitled to make their own decisions regarding reporting, contact with their rapist, their healing journey, and to whom they are comfortable disclosing. If someone in your life is a survivor, I wrote a post about supporting the survivor in your life here. If you are a survivor reading this and you would like resources or someone to talk to about what happened, I highly recommend RAINN's Online Hotline.

I am eternally grateful to the folks in the sex positive community who have reached out to offer their support. It means the world that I have a community standing behind me, supporting me in sharing my story.

I have been contacted privately by another woman who shared that Ben raped her while she was in high school. She gave me permission to share her story anonymously (we're going to call her Brave Survivor) and I am honored that she disclosed to me. This now brings the count to three: me, Really Brave Person, and Brave Survivor.

I was also messaged by another woman who shared the following *note, the screencap below is not a disclosure of assault. This woman is lending her voice to say that although she was not assaulted by Ben, she had an unsettling conversation with him that she felt called to share*:

These latest revelations are intense. But hearing from Brave Survivor this morning reinforced that I made the right decision in naming him. There may be others out there and I hope, by reading this, you know that you are not alone. I'll be adding to this post when/if additional information comes to light.

I woke up to a message from a girl who is a friend of my family. She shared this:

I asked her if she knew how old Ben was at the time or if she remembered how old she was. She is four years younger than I am and Ben is three years older, so I am estimating the math here:

I'm offering this without comment other than to say that I am honored that she chose to share with me and I am grateful that this incident in the woods didn't go further than Ben asking inappropriate questions and making her feel uncomfortable.

I just received this email from a person who wishes to remain anonymous but gave permission to share her message.

This. This right here ^ is why I chose to name him. I will continue to post things that people share with me (with their permission) about their experiences with Ben.

I just received another message from someone who had an incident with Ben.

I am relieved to read that she successfully fought Ben off. As you can see above, she requested that I share her story. I do want to clarify though, I am not a sex therapist. I am a sexuality educator and writer, not a licensed therapist.

I will continue to add these disclosures as I receive them, with the disclosing person's identity withheld if requested. 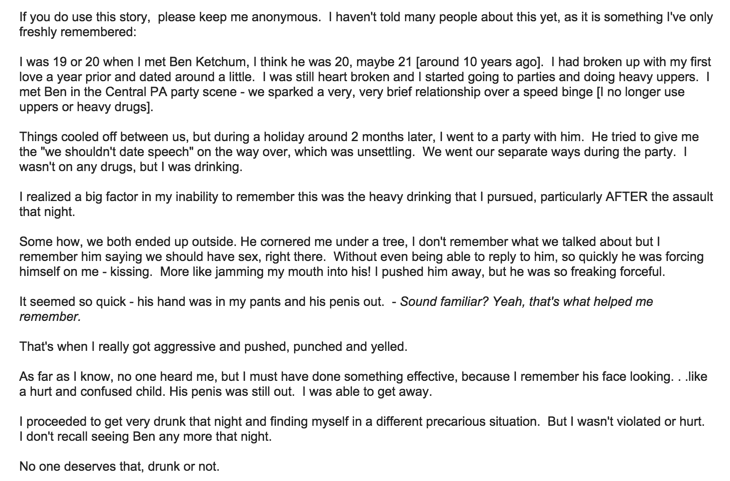 I am speechless. I never anticipated that so many people would come forward and share their experiences. I am overwhelmed by the bravery of these folks, reaching out to me and telling their stories. Breaking the silence. I'm watching the power of vulnerability manifest in real time.

It's also been triggering for me. I've been having flashbacks and a lot of anxiety. I'm grateful for my support network, my wonderful partner, and for every person who has messaged me via email and on Facebook expressing their support and solidarity.

This morning I received this message on Facebook. It was lengthy so I broke it into three screenshots. I am honored by these women who are coming forward and disclosing their experiences. 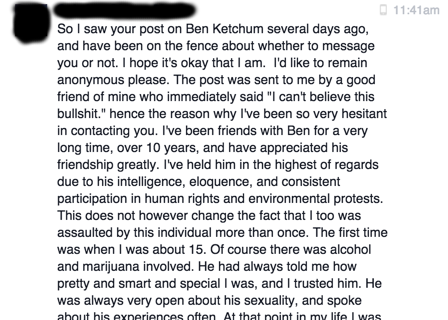 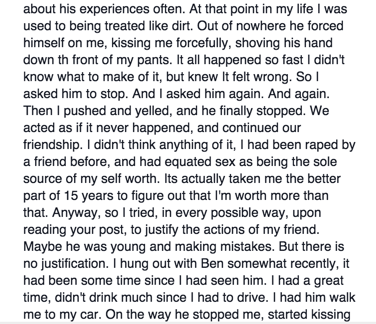 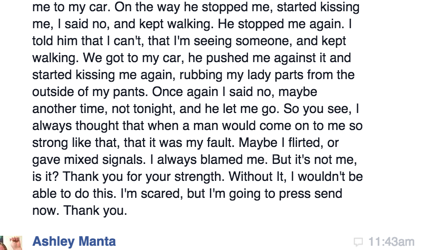