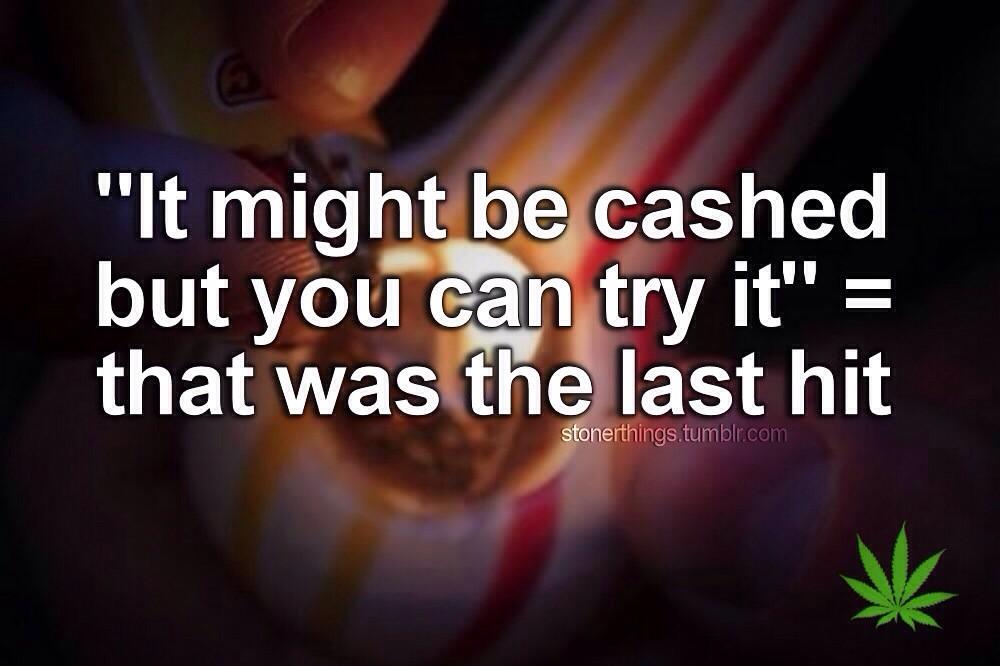 This is the first rule and in my mind, the cornerstone of stoner culture. There seems to be a baseline generosity in the cannabis community. Stoners understand how lovely it is to smoke and be high. They also know what it's like to not bring any of your stash to a party because you're not sure if it's "that kind of party." So when you're out at a social gathering and someone comes up and clearly wants to take a hit, do them a solid and share. It's good to pay it forward so one day, when you're in need, someone will hopefully offer you a hit of their bowl.

2. Take care of your fellow stoners. If someone is having a bad time, watch out for them. Give them water and a safe place to chill. Do not, under any circumstances, take advantage of their inebriated state.

I did my first dab hit last January with a group of guys I'd just met at an industry event. It turned out to be way too potent for me and I got super anxious and paranoid, thinking these guys were going to cut me up and leave me in a ditch. I even threw up. It was terrible. Thankfully, they stuck to the Code and gave me water, then one guy drove me back to the hotel where the event was happening and let me crash in his room, in the other double bed. He was completely respectful and even brought me a bagel in the morning.

3. If you get green, don't light the middle of the bowl and ruin it for everyone. Always corner the bowl.

When I started writing this post, I consulted my personal pundit, Katie Mack (who used to work in a rehab so she picked up a lot of interesting facts and tips from the residents). This was her suggested addition to the list. Amusingly enough, I started doing this on my own because it actually conserves the bowl and allows you to get green multiple times during your smoke sesh.

4. Never pressure another stoner to use more than they need or want. (Consent!!!)

"Come on, take another hit, don't be a wimp" - said no stoner ever. One thing I have always loved about smoking in groups is when I tap out and take myself out of the bowl rotation, it never warrants a comment. Polite stoners do not pressure people to push their limits. They respect boundaries. Part of it is utilitarian--no one wants to waste weed. Stoners tend to be particularly parsimonious when their stash is getting low. Yet there is also something more. There is base level of respect for the other folks in the circle, allowing us to trust them to know their limits.

As a corollary to the above rule, know your limits. Your fellow stoners are duty-bound to take care of your stoned ass if you go overboard, but don't put them in that position if you can help it.  This includes getting high and eating everything in someone else's kitchen, trying to get their pets stoned, stealing the lighter, or harshing the mellow of the room by being raucous.  Or, the most egregious sin of all, babysitting the bowl/joint/bong while you're telling a story. Pass that shit. Lastly - wait your turn. Don't cut in line (thank you Lola!) and don't throw off the rotation if you just joined. Think of it like a poker game - if you buy in after the hand has started, you have to wait until the next hand to play.

6. Let people do their own thing.

Some people get super social and giggly when they're high. Some relax into silent contemplation of the universe (or the back of their hand). Allow space for this spectrum of reactions. In other words, don't pressure an introvert into a conversation when they just want to relax and enjoy the ride. On the other hand, if you're feeling chatty, check in with the people around you to find someone else who can meet you in that headspace. Trust me, someone in the group 100% wants to talk to you about how the Spice Girls are the most revolutionary band of the 90s.