Shailene Woodley Has No Fucking Clue What Feminism Is

I came across this headline on Time's website: "Shailene Woodley on Why She's Not a Feminist." Now admittedly, before this morning, I didn't know anything about Shailene Woodley. But now I know one thing: Shailene Woodley has no fucking clue what feminism is. 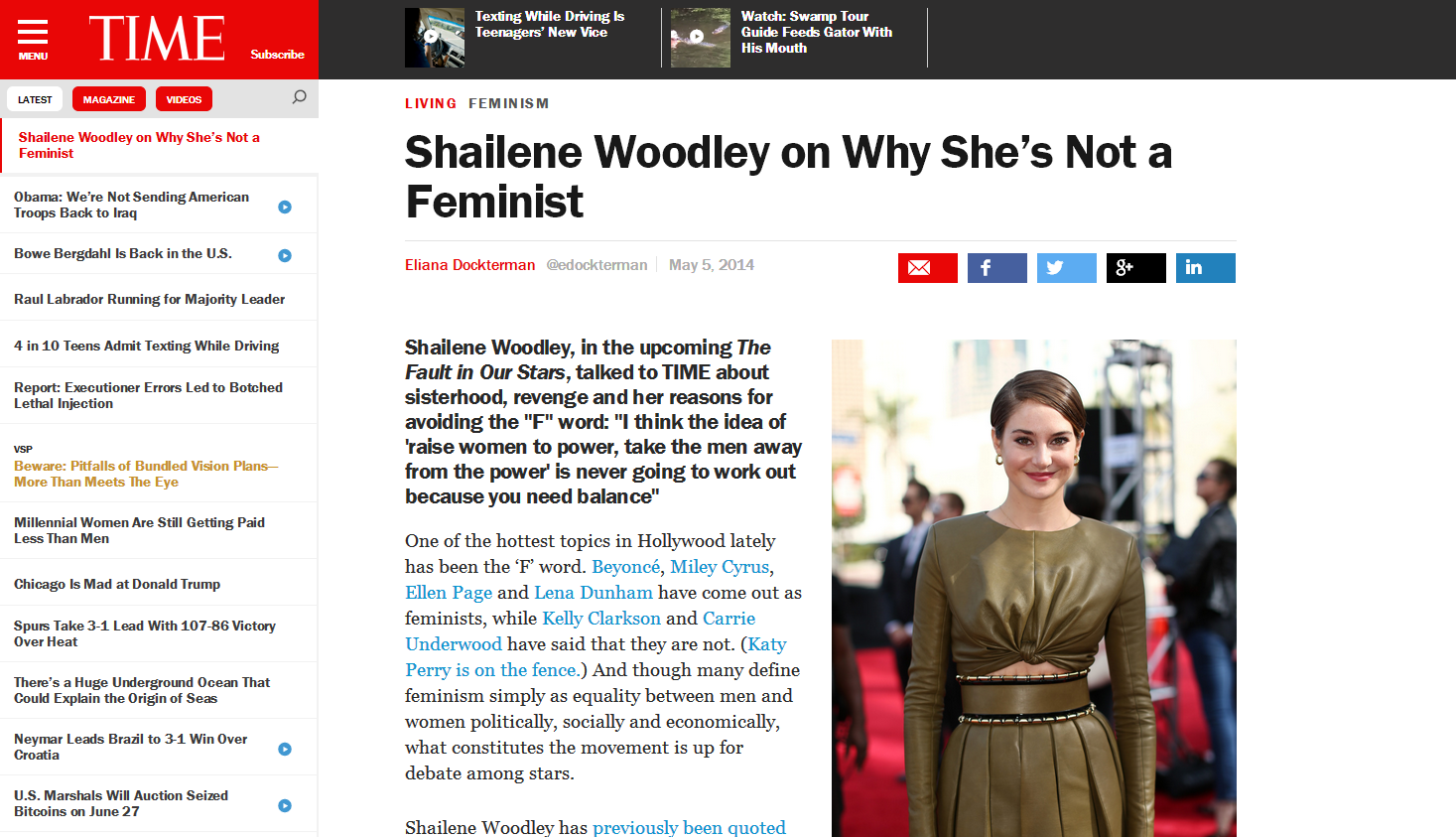 The article continues (emphasis mine):

TIME: You’ve talked about before—withDivergent specifically, too—about being conscious of the kind of messages that you’re sending to young female fans when you’re taking on roles. Do you consider yourself a feminist?

Shailene Woodley: No because I love men, and I think the idea of ‘raise women to power, take the men away from the power’ is never going to work out because you need balance. With myself, I’m very in touch with my masculine side. And I’m 50 percent feminine and 50 percent masculine, same as I think a lot of us are. And I think that is important to note. And also I think that if men went down and women rose to power, that wouldn’t work either. We have to have a fine balance.

My biggest thing is really sisterhood more than feminism. I don’t know how we as women expect men to respect us because we don’t even seem to respect each other. There’s so much jealousy, so much comparison and envy. And “This girl did this to me and that girl did that to me.” And it’s just so silly and heartbreaking in a way.

It’s really neat to see: there’s that new Judd Apatow [sic] movie coming out, The Other Woman, and that looks really good because I think it’s really neat that it shows women coming together and supporting each other and creating a sisterhood of support for one another versus hating each other for something that somebody else created.

I haven't seen The Other Woman, but my understanding is that there is cheating and then the two women team up to take down the male lead. I would imagine it makes for satisfying viewing, but I don't quite see how that behavior is preferable to feminism, which intentionally defies the "us versus them" paradigm. Feminism is fighting inequality, it's fighting power structures and patriarchal norms. We don't hate men.

I cannot help but wonder why no one has ever educated this woman about what feminism actually means. If Ms. Woodley had bothered to read a dictionary, she would have found this (via the Merriam Webster Online Dictionary):

: the belief that men and women should have equal rights and opportunities

: organized activity in support of women's rights and interests

If I could digress momentarily and comment on the gender binary in the dictionary definition of feminism, I wish it said "the belief that all people should have equal rights and opportunities regardless of gender." At least that's my definition.

I hope with all my heart that Ms. Woodley becomes more educated about feminism and revises her views.