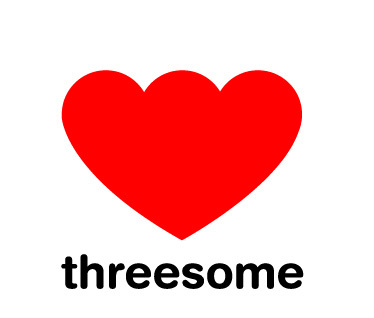 I drove down to San Diego with a bag of sex toys, lube, condoms, and all of my new lingerie. When I arrived at her house, we made our game plan. It's so much fun to prepare for sex with another person. We picked out and tried on lingerie, sent tantalizing texts to B, and decided that once he got there, we'd kiss and tease him and then leaving him wanting more by suddenly announcing that we were ready for dinner. After dinner, we'd tag team him for a while, break for some naked hot tubbing, and finish off back in the bedroom. It was a solid plan.

He arrived to find us in bras and panties. He quickly undressed (such a sexy body) and climbed into her king size bed between us. Sidenote: if you can help it, always go for a king size bed for threesomes and moresomes. A queen bed would have been entirely too cramped. We began kissing and stroking all over his body. She and B are both skilled in tantric and energetic sex, so the room was humming with yummy energy almost immediately. I'm a novice energy player, but I feel like I leveled up several times during this encounter. I watched her touch electrify his body with desire. A sultry glance set off a tsunami of pleasure spasms. It was so fucking hot.

Of course, though I may be a baby tantrika, I am more than skilled in pleasurable touch. She and I had agreed it would be fun to have one of us kissing and playing with his upper body while the other played with his absolutely exquisite cock. Thick and long and possessing the rare ability to stay hard for hours, (no seriously. HOURS.), it is truly a thing of beauty. I brought plenty of lube--because of course I did--and set about giving one of my epic hand jobs. Thanks to Sliquid Silver silicone lube for making my handjobs extra awesome. Every time I would re-up on lube, I watched his mouth open, his eyes close, and a look of sheer delight pass over his face. I pulled out every one of my best tricks: the pepper grinder, the juicer, the triangle of glory...I even made up a few new ones. Just as he was really getting into it, she and I exchanged mischievous glances and announced that it was time for dinner. His wry grin told us that he had been expecting this.

We dressed quickly and he drove us to a nearby steakhouse. She secured a corner booth in the back where it would be tough for other diners to see us. B was the cream in our sexy oreo and we each put a hand on his inner thigh while we perused the menu. I could feel his cock stirring inside his jeans and it made me wet. We ate decadently and finished the meal with strawberries, whipped cream, and vanilla ice cream.

Once back at her house, we stripped down and made our way back to the bedroom. He announced that he'd love nothing more than to fuck us both and since she was hosting us, I deferred to her to be first. B is an oral sex master, so he started out kissing and licking and teasing her pussy while I stroked his cock. I also grabbed the internal condom and lubed it up so they'd be ready to go. He slid into her and I watched her expression change from anticipation to ecstasy. His movements were subtle, you could tell that their connection deeply rooted in tantric energy and pleasure rippled through both of them with minimal effort. I could feel the heat radiating off their writhing bodies and found myself moaning along with them.

Then it was my turn. The great thing about internal condoms is they stay inside the vagina, so he could go back and forth between our bodies without having to change condoms ten times. He started off teasing my lips with his tongue, parting them gently, and licking my clit with skill and enthusiasm. Normally I'd be reveling in such oral delights, but I was craving his cock. I pulled him on top of me and guided him inside me. Holy shit. Holy fucking shit. He filled me up, stretched me out, and still I wanted more. He knows I like it hard and rough, so we skipped the subtle and went for the deep, vigorous pounding. I could feel my tits bouncing with every thrust. I raked my nails down his back and begged for more. I don't know how long we went on like that, but when we finally paused, we were both drenched in sweat and twitching from all of the energy.

We agreed it was time for cake (I baked a chocolate cake with peanut butter Swiss buttercream--from scratch--for his birthday) and hot tubbing. One of the reasons I bake is because I love watching the eyes closed "O" face that people make when they take the first bite of my food. It's kind of a power trip. She and B did not disappoint. We headed out for some naked hot tubbing under the stars and it was glorious. I'm pretty sure I gave him either a hand job or a blowjob, but I'm a little fuzzy on the details. After we were sufficiently soaked, we went back inside for round three (or four maybe, it's hard to keep track). We'd already been playing for three hours and it was time to bring it home.

I'd wanted to explore prostate massage with B since I met him. He was relatively new to it and I found myself biting my lip as I imagined walking him down that pleasure path. I put on a glove, pausing to snap it on my wrist for effect, and dripped lube all over my fingers so I could lubricate his ass. Pro tip: when doing anything with the ass, use lube. So much lube. If you think you've used enough, use more. I massaged his ass from the outside while she stroked his cock. Once I had a good bit of lube outside, on my glove, and inside, I slowly slid my finger in. I could feel his muscles clench around me and I reminded him to breathe. As soon as he took that first breath, I could feel him relax. I slid in deeper, feeling for his prostate. There it was. I gave it deep massaging pressure and watched his face flush and his body shudder. I paused only long enough to give her more lube for his cock and kept going. Kept massaging with deep, deliberate strokes.  It was so fucking hot.

When we were finished with the prostate massage, we shared some water before moving into the final phase of the evening. Me on top, riding him to orgasm. I slid down and felt my pussy clench around him. I moved my hips up and down, taking him deep inside of me, grinding with muscles conditioned by years of horseback riding. Then I did my favorite trick. I can, while on top, essentially throw my pelvis back and forth with great force at an impressive speed for a surprisingly long time. I locked eyes with him and rode him until he came. We all collapsed, feeling utterly blissed out from the whole experience.

We hugged and expressed deep appreciation for one another and B and I walked back to our cars. I asked him if it was a good birthday and he could only smile and nod vigorously. I told him I was excited for Saturday, when he'd be in LA and I'd be hosting our one-on-one time. I swear I could fuck that man for days.

It was a long drive back from San Diego to LA, but definitely worth every second.

Wait til you hear about the Saturday sex...Read about it here.

Want to learn all my sexy tips and tricks? Book me for a workshop! I recommend "Handy Skills and Oral Thrills" for these specific skills.