Primordial. Cindy Capobianco of Lord Jones used that word to describe the consciousness-expanding event we had just witnessed and it felt entirely accurate. On April 18th at NeueHouse in Los Angeles, Lord Jones and Sigur Rós debuted their new edible gummy alongside a kaleidoscopic Sound bath and light show experience. It was a joy to witness and I left feeling simultaneously soothed to my core and blown wide open.

Truth be told, I’d never heard of Sigur Rós. When I got the email asking if I’d like to attend, I had to Google them. I learned that Sigur Rós is an Icelandic rock band with a sound that can be characterized as ambient postmodern and anthemic. Honestly though, there’s a big part of me that’s grateful that I got to go into that evening with no preconceived notions and no expectations--it helped me be completely present with the feelings and sensations that arose throughout the night.

After waiting in line to have my ID and medical card checked and my name verified on the list, I was given a wristband and a ticket, redeemable for one Lord Jones Sigur Rós edible. When I walked in, I saw a large vending table with ornately decorated turquoise boxes filled with what purple cylindrical gummies. Next to that was a table of samples featuring a pyramid of gummies under a large glass lid. A smiling Lord Jones staffer approached me and took my ticket. “We are offering two options tonight. One is a 10mg CBD/2mg THC gummy that will relax your body but not have psychoactive effects. The other is a 5mg THC gummy that might have a mild head high effect for people who are new to cannabis edibles.” I chose the 5mg THC option. I cannot tell you how much I appreciated that they were offering a high CBD dose alongside the low-dose THC.

“Wild Sigurberry” proclaimed the box label, which a quick search revealed is not actually its own fruit but rather a self styled moniker describing a combination of foraged Icelandic blueberries, strawberries, and blackberries. It’s soft and squishy and covered with sugar but it’s overly sweet--it’s pleasantly sweet and tart and I found my mouth watering slightly after swallowing. I could still feel the tang in the back corner of my cheek. The berry flavor is lovely, it’s sort of a raspberry/blueberry/strawberry flavor and has only the vaguest hint of cannabis flavor. Not at all on the initial taste but about half the ¾ of the way through chewing I could perceived the slightest bit of the familiar herbal taste. Just enough to know that it was there--not overpowering and not unpleasant by any means.

After the samples were distributed, we were invited to hang out outside for about twenty minutes while the final room preparations were completed. The sign on the door discouraged use of devices during the Sound bath and encouraged people to put their phones on silent. I was one of the first people in the door, but I realized as we were invited into the Sound bath room that I was slightly worried the edibles hadn’t had enough time to take effect. It later turned out I worried needlessly. Once inside the dimly lit space, littered with cushions, Casper mattresses, and about half a dozen armless couches, I made a beeline to the latter and took a seat. Another attendee sat down and we simultaneously realized that if we positioned ourselves with our heads toward the center of the couch and our legs hanging off our respective sides, we could both lay down. By the time I made myself comfortable, it had been about thirty minutes since taking the edible.  Laying in a mostly darkened room, illuminated only by sporadic yellow lights overhead, I tried to take it in as much as I could. The space continued to fill with people over the next ten minutes, but once everyone was in their places we just...waited. It was quiet and there was nothing to do other than be present and relax. It was an ideal preamble to the Sound bath. I found the quiet, dimly lit room to be delightfully meditative and rather than play on my phone to pass the time, I chose to close my eyes and focus on my breathing. In our hyper-connected world, lying with strangers in relative darkness felt connective in a different and more visceral way. We were in this together--waiting patiently in silence to have our minds blown.

Just about an hour after taking the edible, but before the sound bath actually began, I started to feel the effects. My body felt relaxed and entirely without pain--an impressive feat considering all the time I’d spent in my car that week. I felt my body melting pleasantly into the couch I was laying on. My head felt a little spacey but in the best possible way, watching my thoughts drift by like clouds. I felt calm and mellow. Although it was low lighting, I could vaguely make out a fixture suspended from the ceiling in the middle of the room. It looked like a combination of a neuron and a sentinel machine from The Matrix. It had a large circular center and tentacle looking protrusions all over it.

Suddenly the lights dimmed to darkness. I trembled with anticipation. What happens now? I didn’t have to wonder for long. A slow, incrementally increasing sound filled the room. There were no lyrics at first, just moods expressed through music. It brought up sensations of the beginning of a journey--taking the initial steps into new terrain. Other instruments joined in and the space was filled with sound. I could feel it permeating every cell of my body. Simultaneously, the light fixture began to glow. As the music swelled, the light morphed and changed from a cell to a beating heart to a swirl of patterns to a wormhole opening into another dimension--or at least that’s how it felt. I was mesmerized. The vocals began at some point and the lights shifted along with the eerily ethereal falsetto. Three men with gossamer hooded robes and candles wandered throughout the room--not speaking or interacting, just witnessing and enriching the experience. I watched them intently at first but ultimately noticed my attention returning over and over again to the glowing tendrils overhead. 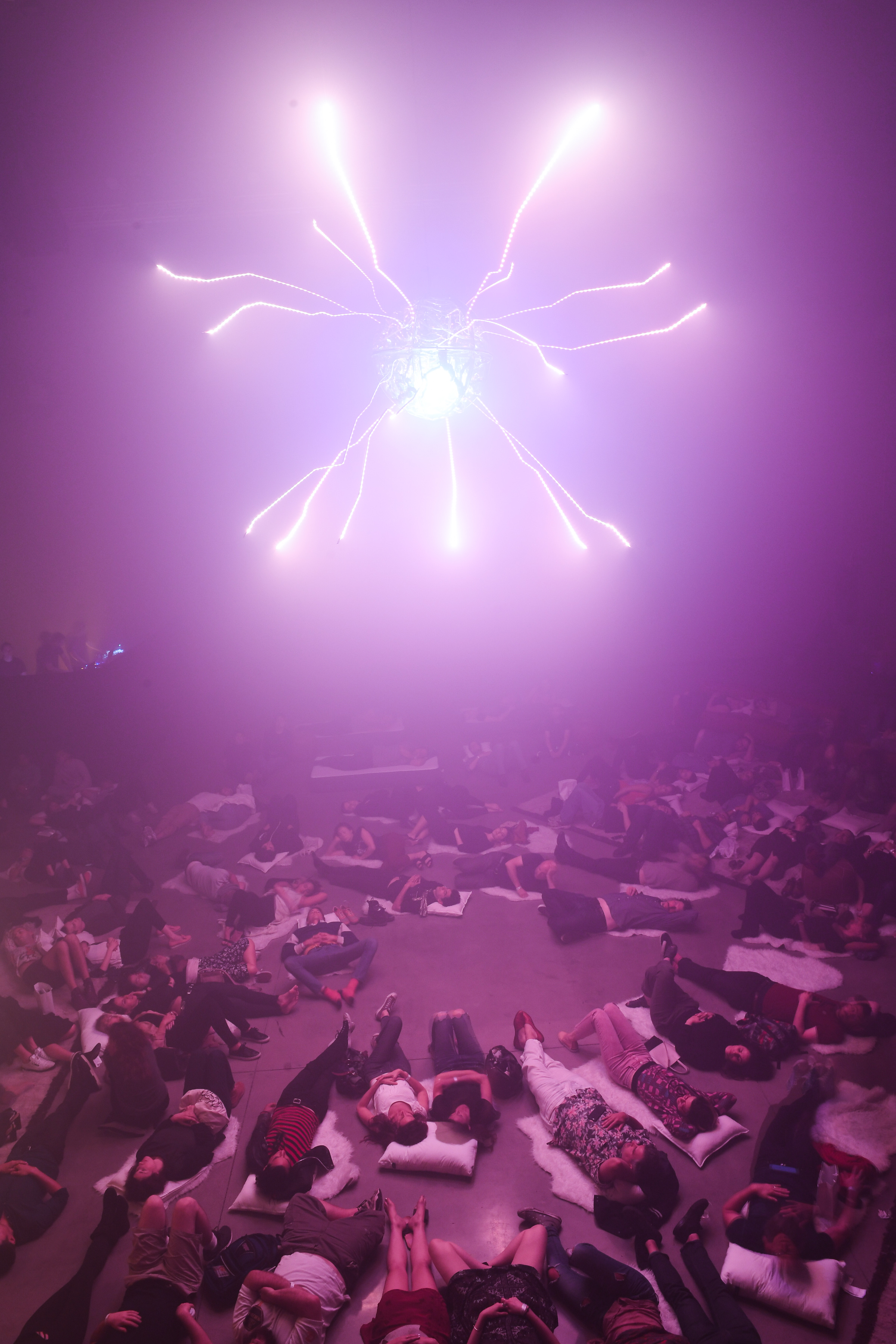 The experience was almost psychedelic in its qualities. The full body sensations, the way that the combination of lights and sounds transported me to other dimensions and allowed my mind to feel that it had transcended time and space--it was unlike anything I’ve ever felt before. The cannabis (okay, confession, I managed to score a second edible so I had 10mg of THC coursing through my veins instead of just 5mg) richly enhanced the experience and allowed my mind to suspend disbelief and fully immerse myself in the journey. I completely lost track of time, so when the music finally faded to silence and the overhead lights came up to their pre-show levels, I stayed still for a few minutes. I glanced around at the other 200 or so attendees, watching some start to stretch, others get up quickly and left, while still others sat lazily in repose.

I did my standard post-meditation practice of wiggling my extremities to start to bring my body and mind back to the here and now. As I walked out the door into the lobby of NeueHouse, I realized I felt utterly transmogrified. It was as though both my body and mind had been disassembled, dusted off, oiled, and then reassembled. I felt fucking fantastic.

I caught up with Cindy after the Sound bath and expressed my deep gratitude for being invited to attend. I told her I was going to need to make heavy use of a thesaurus to accurately convey what I’d witnessed that night, which was when she suggested “primordial” as an adjective. She was right--it fit. We exchanged information and promised to stay in touch. A few days later I emailed and asked if anyone at Lord Jones would be willing to share their thoughts on what it was like for to co-create this experience with Sigur Rós. Rob Rosenheck, founder of Lord Jones, shared, “Our collaboration with Sigur Rós is a dream come true and the response to the our Sound bath has been phenomenal.  We’ve heard from people as far away as Iceland, Russia, Japan and England. The Sound bath was truly transcendent. Jónsi and all of the people who collaborated to make the event a reality, created something pure, beautiful and new. It was one of the most memorable experiences of my life.”

Would you go to a cannabis enhanced sound bath? Have you been to anything like this? Tell me all about it!